Why is a new plan necessary?

With the construction of the official Francis Dog Park on the north field in 2015, and construction at the 2501 M Street building at the south of the field beginning in 2016, the 2009 master plan (see existing article on this site) became out-of-date and inaccurate. 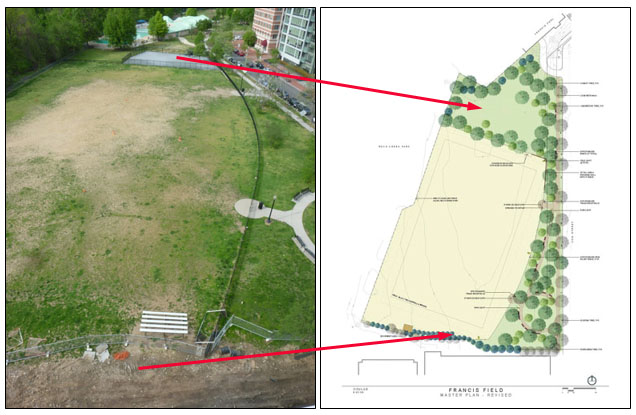 The 2009 plan—which was under development for two years during the administration of Mayor Adrian Fenty—was stated to "guide the use of Francis Field for the next 10-15 years."[1]

Friends of Francis Field (FFF) was a party in that zoning case. (See the Zoning Case article on this website).

In April 2016, FFF compared a photograph of the existing conditions to the 2009 architectural plan. It is shown at left with red arrows.

The 2016 photo showed the usual, bare-dirt playing field that had existed for many years with insufficient maintenance by the contractors hired and paid by the D.C. government.

The 2009 plan does not show the dog park at the north. Many of the trees indicated on the plan had never been added, and new landscaping was being designed for the south field restoration when the 2501 M Street construction was finished.

After planting 43 new trees in May 2017 and completing an experimental (and successful) greening project that began in June 2017 under a partnership agreement with the D.C. Department of Parks and Recreation (DPR), the field was green with natural grasses and native species, as shown in the May 2018 photograph below. This was accomplished with private funding by FFF, using a different landscape contractor than the one hired by the D.C. government. 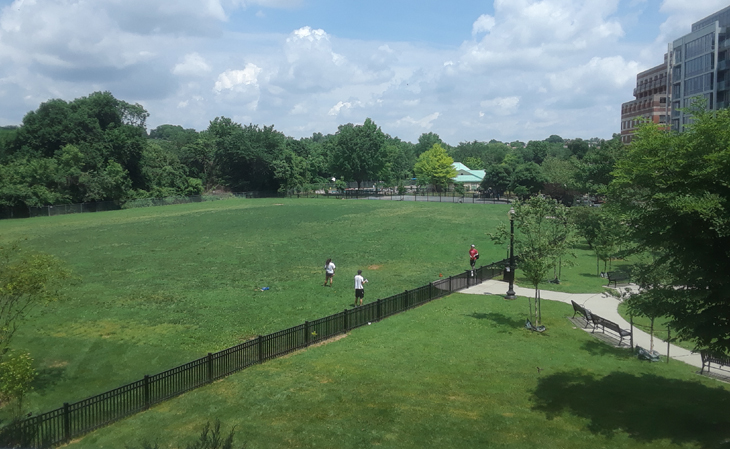 Another agreement was reached between FFF and DPR in March 2018 to prepare an updated "master landscape plan" for the field. The text of that one-page agreement is included on this website in PDF format.

The new master plan will record changes already made in the field; but it will also provide a plan for other improvements, which are illustrated, with the new plan, below.

Shown at right, below, is the revised landscape plan that FFF is recommending to replace and update the 2009 master plan which CFA approved in September 2009. 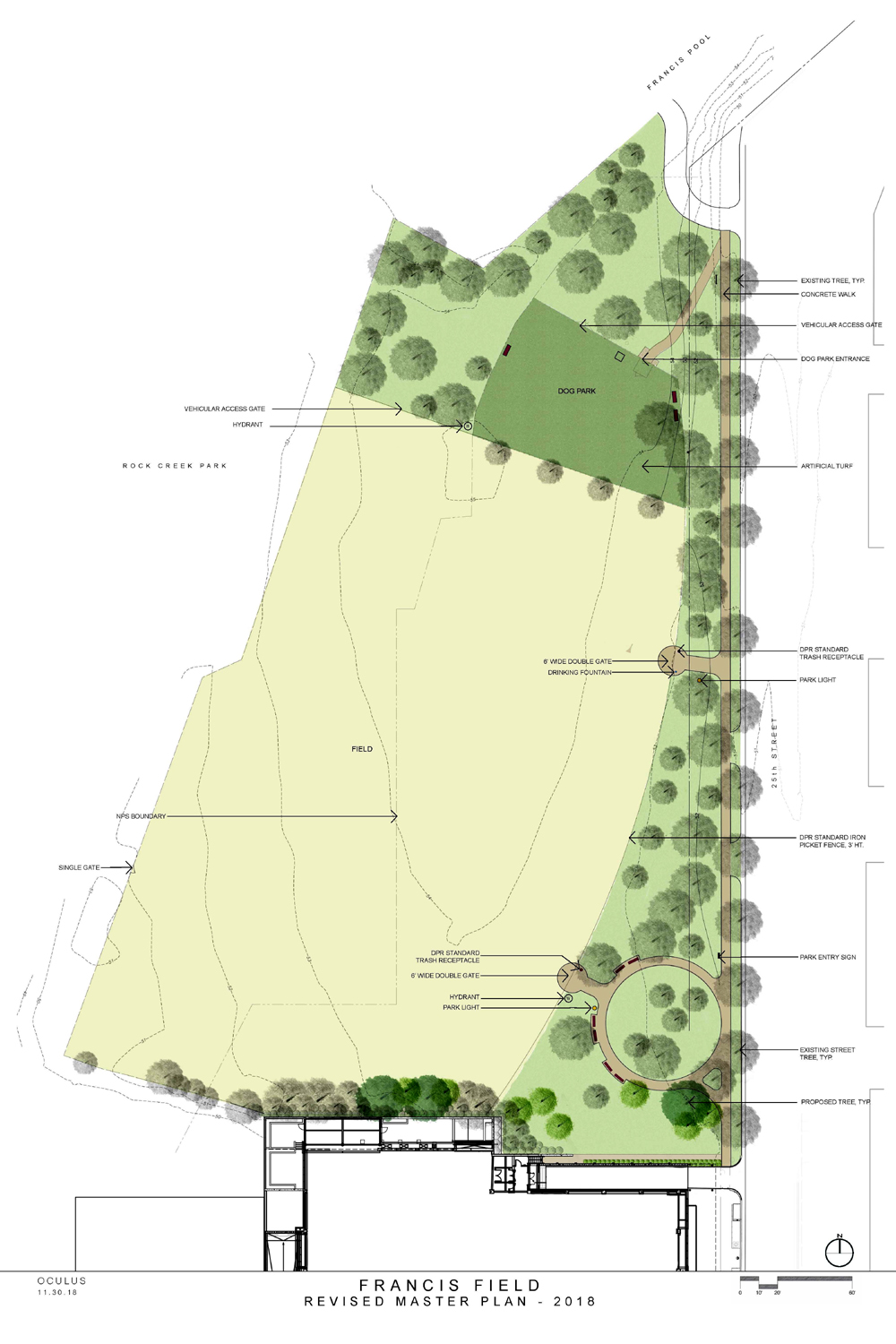 FFF believes that these changes are not controversial. They improve the field but do not change it in any major way.

Mostly, they record major changes that have already been made—the dog park for example—or minor additions, including new plantings of trees, evergreens, and shrubs.

A larger view of the plan in PDF format is on this website. The labels can be read easily on that version.

The plan is completely funded by FFF, and paid for with private funds. As the agreement states, it must be approved by DPR, and then submitted to the U.S. Commission of Fine Arts (CFA) for architectural and aesthetic review.

The National Park Service (NPS) which owns about half of the athletic field area (see NPS map on this website), will review and comment on the plan as part of the CFA review process.

The FFF Board of Directors reviewed a draft of the plan at its October 4, 2018, meeting; then appointed a committee to manage the project, and authorized the hiring of a professional landscape architect to complete the proposed plan.

On November 30, the FFF landscape committee approved the design shown and its elements. The plan was sent to DPR on December 12, 2018. Since then, FFF has been seeking comments from its members and informing other stakeholders about the plan, as required in its partnership agreement with DPR.

As of this posting, DPR has not approved the proposed plan.

FFF is preparing to present the plan to the Foggy Bottom/West End Advisory Neighborhood Commission (ANC-2A) at its February 20, 2019, public meeting at the West End Library. For the time of this presenation, see the agenda on the ANC-2A website.

What's different in the plan?

The big changes are features that presently exist, but have not been recorded on 2009 plan. These include the Francis Dog Park, added by DPR; and the footprint of the building at 2501 M Street, at the southern end of the field, which was extended by construction to abut the field with no buffer area between the public recreation area and the new residential units. (See plan above.)

The other significant changes are described below. 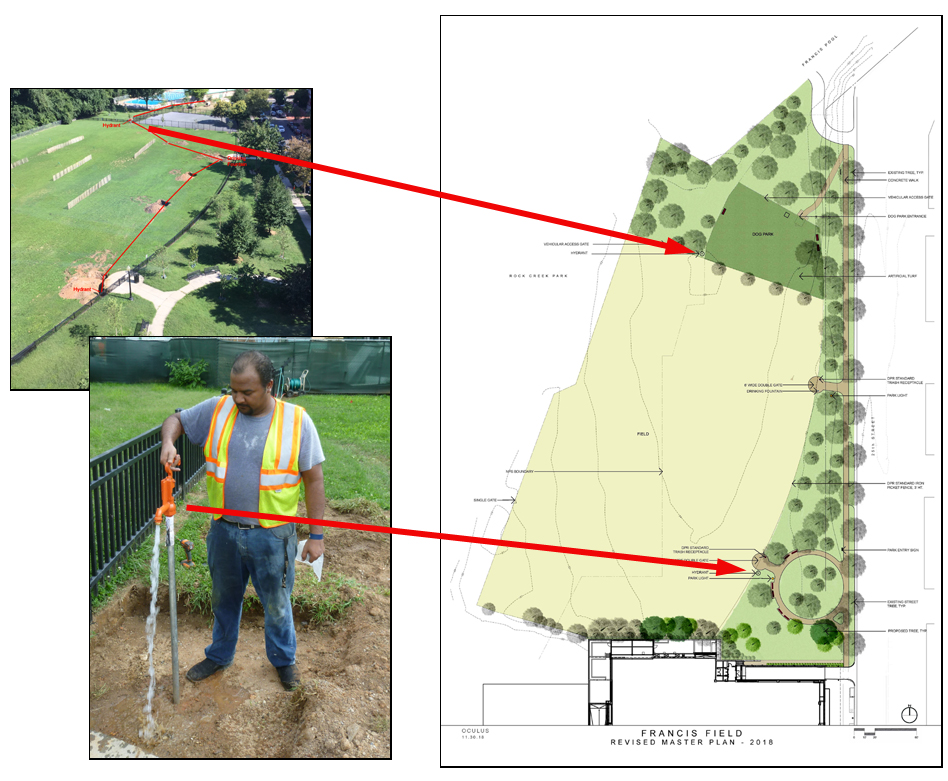 Like the drinking fountain These hydrants are also connected from the water line in the Francis Swimming Pool pump building. 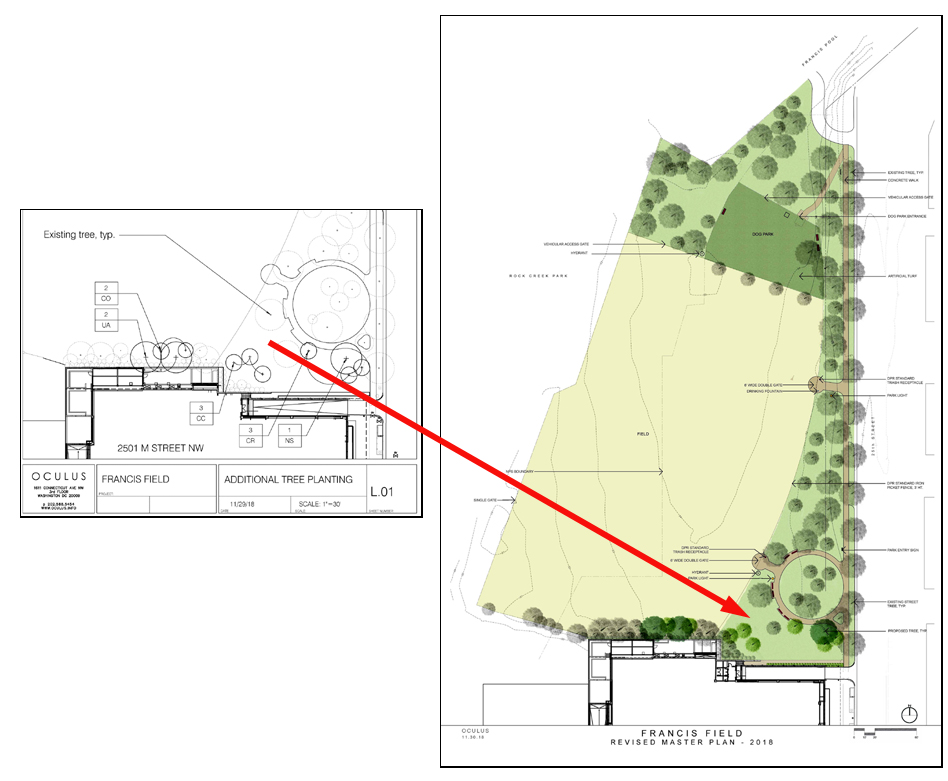 More Trees. Another addition is 11 new trees for the rear field area. These were suggested and requested by the Urban Forestry Division of the District Department of Transportation (DDOT).

Some trees were included on a landscaping plan for the restoration of this area after the 2501 M Street building was converted. That plan was submitted to the CFA by the building's architect, and it was approved by the CFA in 2015. To assure that all the plans would be consistent, FFF asked our landscape architect to specify the tree species and locations, in cooperation with DDOT. The result was acceptable to DDOT and DPR.

The location of the new DDOT trees was also necessary to determine before the other landscaping elements—mostly small evergreens and shrubs—could be specified.

A large-size plan of the new tree planting is on this website in PDF format. 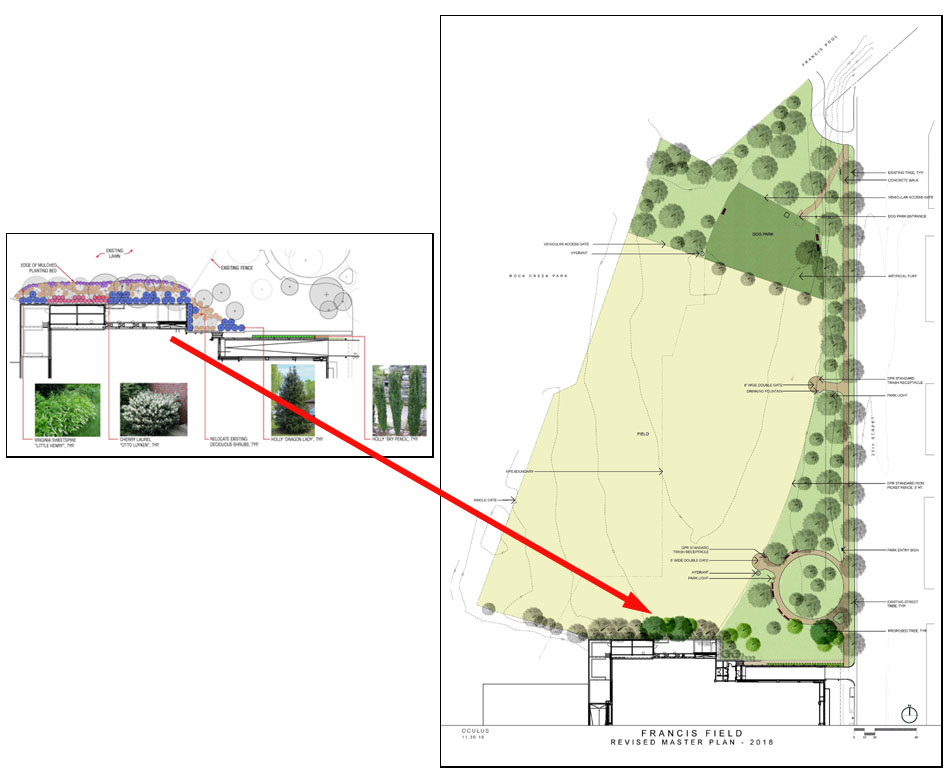 New Rear-Field Landscaping. The easement granted at the south end of the field in 2015—for construction related to the conversion of the 2501 M Street building—required restoration, according to plans submitted by the developer's architect and approved by the CFA.

While that area has been restored with grass, young trees, and landscape plantings, the DDOT trees now need to be added. In addition, and the building's interface with the playing field remains somewhat abrupt.

Thus, FFF has asked its landscape architect for an updated plan that will make the rear-field considerably more park-like, blending the new trees appropriately with the other landscaping elements.

This plan will consist mostly of adding some evergreens and low shrubs to create more of a transition between the concrete of the new construction and the grass surface of the playing field.

A larger view of the new rear-field landscaping plan is shown below. A PDF of this same rear-field drawing is on this website. It also includes a drawing of existing landscaping, and the 11 trees that DDOT will be providing as part of this combined rear-landscaping plan. 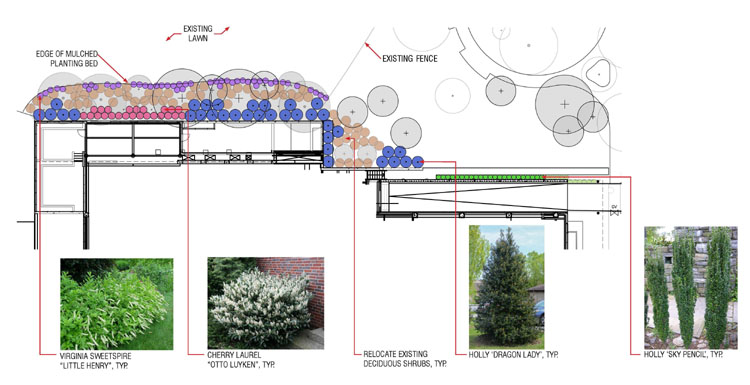 The plan above was not drawn until January 28, 2019, and may change slightly in details such as the species and sizes of the plants. 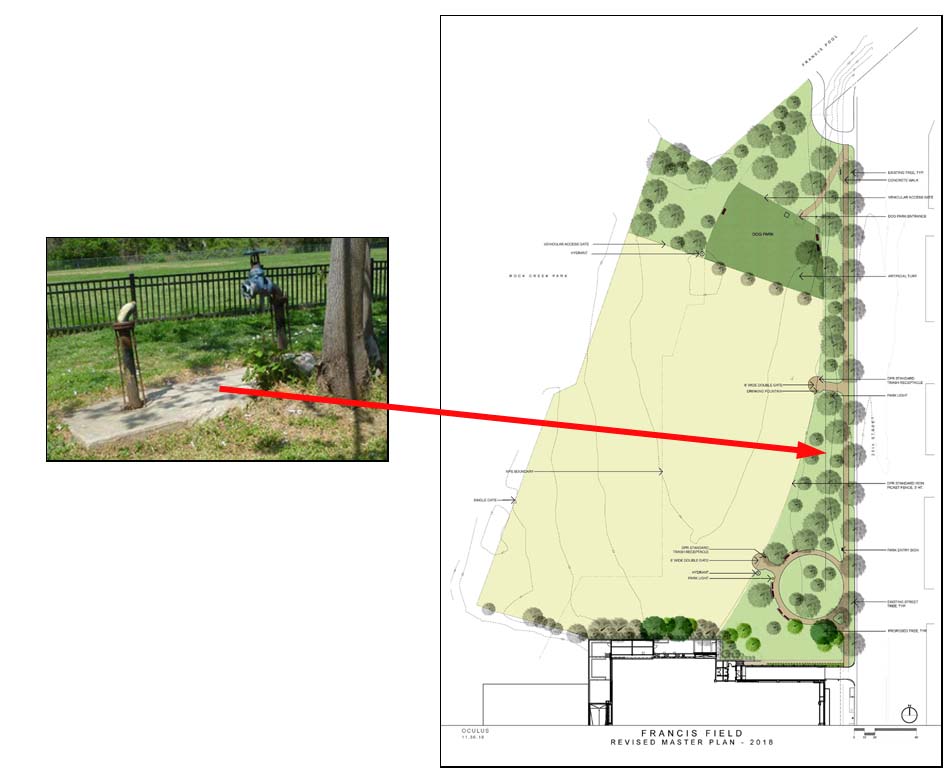 Removal of Obsolete Valve. Our partnership agreement allows the "removal of obsolete elements." One of these that is planned is the removal of the valves that were once connected to the irrigation system that George Washington University put on the field in 1991, and abandoned two years later. (See Neglect article on this website.)

At that time, the system drew water from the water main under 25th Street. The old Francis Swimming Pool, constructed in 1929, was still in place then. A new pool and pump house were constructed in 1992. If any new irrigation system were to be installed in the future, the water source would become the swimming pool lines in the pump house.

Several years ago, scrap salvagers illegally removed the brass pipe connector on this valve, and the concrete footing is now coming out of the ground as well. This is a non-functional eyesore and tripping hazard. This area of the field will benefit from the removal of this obsolete element.

02. District of Columbia Zoning Commission, ZC Order No. 06-35, July 9, 2007, p.8. This is the order for a Planned Unit Development allowing the alteration of three office buildings at 1227-1231 25th Street NW, commonly referred to as the BNA buildings. PDF format. See pages 15 and 16 for Francis Field improvements ordered.