At the request of Friends of Francis Field (FFF), and with the prodding of our elected representatives, the District government has promised that the central playing field area of Francis Field will be properly maintained going forward. This will include regular seeding, fertilization, and aeration by a private contractor that is paid from public funds to maintain the public facility.

The photograph at left shows the field being fertilized on June 29, 2018, by a sub-contractor to the primary contract holder, Fort Myer Construction.

During 2017, FFF undertook the restoration of the bare dirt playing field with private funds, under a public/private partnership agreement with DPR. (See Grass Planting, and October 2017 and May 2018 reports on this website.)

At the end of 2017, the FFF board voted to spend no additional private funds on the project until it could be determined if the private contractors being paid by the District government to maintain the field were actually doing the work. Photos from 2011 to 2017 show little evidence of successful maintenance by DGS contractors. See Neglect article on this website.

While the basic DGS contract for grass fields (like Francis) requires seeding, fertilizing and aeration twice a year—in the spring and fall—no grass was planted on Francis Field in the spring of 2018. During our June 14 meeting with DGS, Donny Gonzales, its deputy director for facilities, explained that DGS contracts were "a la carte," and that not all services were provided at all fields.

At the suggestion of William K. Smith, chair of ANC-2A, DGS agreed to a new maintenance schedule, that will include seeding twice a year, in spring and fall, fertilization three times, and aeration twice.

DGS has also agreed to have the subcontractor advise FFF of the fall schedule for this work. No planting will take place during the summer months.

District government representatives have also responded to neighbors' complaints about the noise, crowds, and excessive permitting of Francis Field since it reopened on March 19. These issues were reported in the June posting of this website (see Over-Permitting article). 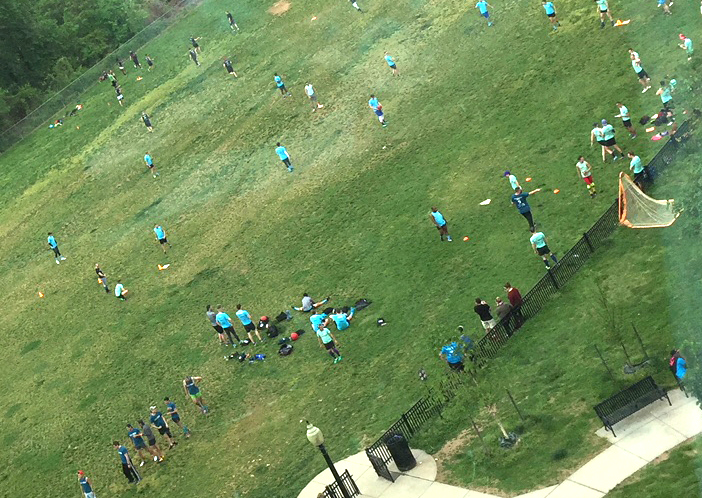 The photograph at right, taken in April 2018, shows a small part of the "social sports" leagues that began mobbing the field last spring.

Seth Shapiro, of the Department of Parks and Recreation (DPR) permitting office, met on the field on May 31, with representatives of Friends of Francis Field (FFF). Sherri Kimbel of Councilmember Jack Evans' office, and Richard Livingstone of Mayor Muriel Bowser's office, also attended to lend support to neighbors' complaints and requests for relief.

Shapiro stated that he would see that permit holders were informed that "boom-boxes" and amplified music of any type were not allowed unless specifically stated in permits, and he confirmed that no current permit holders had this permission.

He suggested that neighbors obtain a resolution from the Advisory Neighborhood Commission (ANC-2A) to request that group size be limited due to the changing residential nature of the setting.

On June 20, FFF made a presentation to ANC-2A on this issue, on behalf of neighborhood residents. It included photographs showing "social sports" leagues with groups as large as 150 players on the field at one time, and playing simultaneous games under permits for as long as five hours at a time. Residents spoke about the related noise and wear on the field.

Commissioners asked several questions before unanimously passing a resolution suggesting the DPR limit groups to no more than 50 players at a time, and requesting that DPR undertake a "review of the appropriate uses and related maintenance for Francis Field, now that it is more closely surrounded by residential rather than office properties."

The complete ANC-2A resolution is on this website in PDF format.