Friends of Francis Field (FFF) held its Annual Membership Meeting on April 24, 2019, in the new lobby lounge of 2501 M Street NW. As in past years, the evening meeting was part social and part business, with a slide presentation of the group's past year and plans for the year ahead.

The photo below, titled "Redbuds in Bloom, Francis Field, April 2019" was used on this year's invitation to members. The meeting was open to all, and the lounge was filled nearly to capacity, with a count of 32 members and guests when the business part of the meeting was called to order at 7:00 pm. 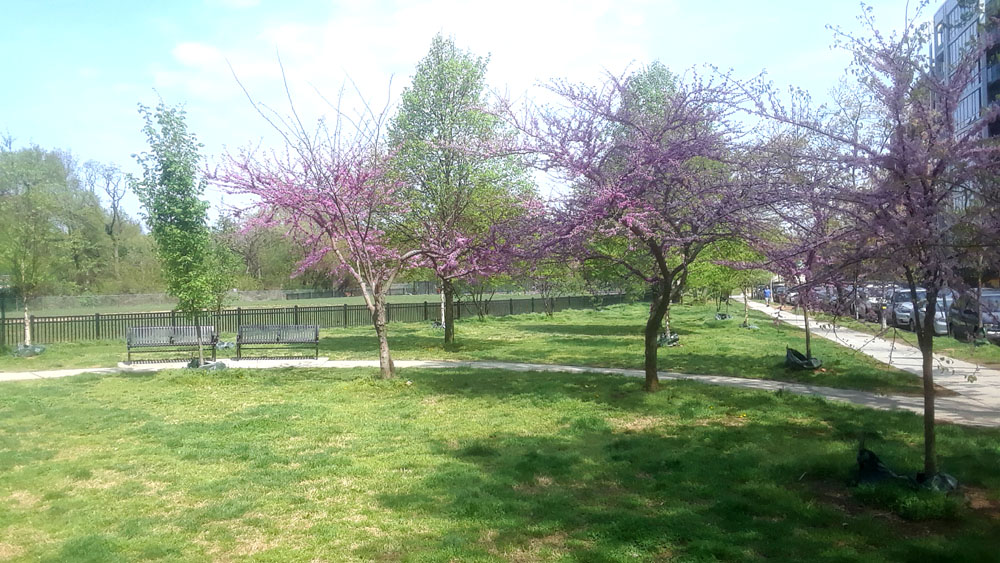 The guest speaker this year was Nicole Goldin, the newly elected member of Advisory Neighborhood Commission 2A (ANC-2A). She now represents the single-member district in which Francis Field is located. This was her first FFF meeting.

A "Meet and Greet" social session began at 6:30, with Beth Monroe serving as this year's chair of the Hospitality Committee.

Laura Belt, Chair of the 2019 Annual Meeting, delivered a slide presentation of current field conditions, which have deteriorated since last year, when the effects of the experimental 2017 "greening project" (see separate article) restored the turf and vegetation to its best condition in two decades.

"There is now a huge disconnect between disproportionate use and lack of maintenance,” she said.

She also reported that although ANC-2A had passed a resolution in support of the new master landscape plan on February 21 (see separate article), the Department of Parks and Recreation (DPR) had not yet approved it.

DPR, had however, sent FFF on April 15 a draft of a partnership renewal through September 2020, which, she said, the FFF Board was currently reviewing.

The only official business conducted at this year's annual meeting, as is traditional, was the election of members of the FFF Board of Directors by the membership. Directors James O'Connell and Gary Griffith, whose previous terms were expiring, were each nominated for another three-year term. Voting was by ballot, and both nominees were re-elected.

The meeting was adjourned on time at 8:00 pm. Many members and guests remained for additional social time in the bar area of the 2501 M residents' lounge.

For information on membership, see the About page on this website.